This is a short guide to get going with Rust and Godot 3.2. This is written with Linux in mind but most of the knowledge should be transferable to MacOS and Windows.

It is worth keeping the Rust code and the Godot project separate from each other, as I experienced Godot trying to import various files from the Rust project every now and then, leaving a rather long wait staring at a progress bar.

and update the [dependencies] section to include gdnative:

Run cargo build and you should have a lib<projectname>.so file in target/debug/ (where <projectname> is the name of your project) This file should be copied / moved into your Godot project once that’s crated.

In case this is done on a Mac the file extension would be .dylib and not .so, and on Windows it’s .dll.

Add a GDNativeLibrary by pressing the “new” button in the inspector: 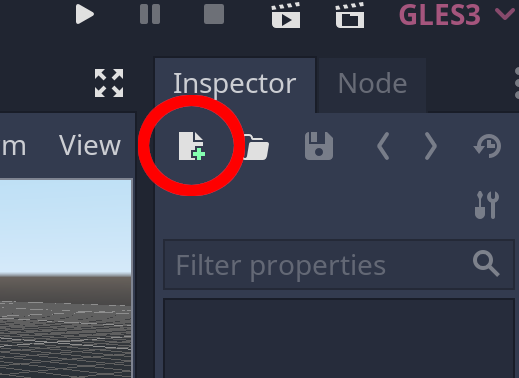 Select the directory icon to load your dynamic library (your .so file on Linux).

If you are on MacOS or Windows select the corresponding platform. Same goes for 32 vs 64-bit

Once the library is selected, save the GDNativeLibrary, as it is not saved when you save the scene, and make sure the file extension is .gdnlib (it will default to .tres). 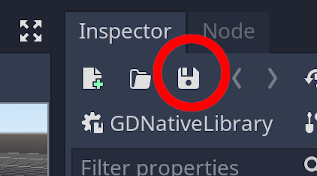 This is the final step. Once you have created (and saved!) your GDNativeLibrary you can finally add a node and attach your HelloWorld struct to it.

If you copied the code from step 4 into lib.rs you may have noticed the use of Node as the owner type, as well as in #[inherit(gdnative::Node)].

If you want to use another node type, e.g Spatial or Sprite, replace Node with the new node type.

Attach a new script to the node. In the “Language” section change from “GDScript” to “NativeScript”, and enter “HelloWorld” in the class name (this should be the name of your struct). 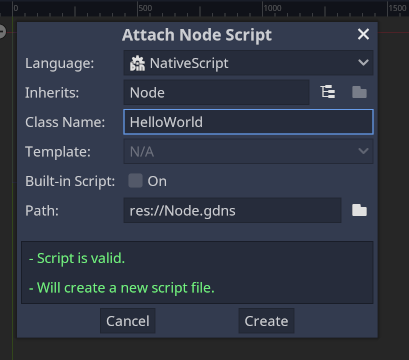 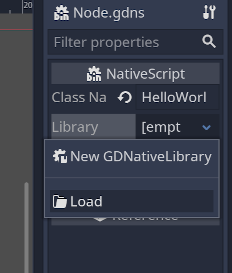 If you run the project with F6 (or press “Play Scene”) you should see “hello, world.” in the Godot output console.

If you want to see stack traces in the event of a panic and you are building for release, add the following to your Cargo.toml file: